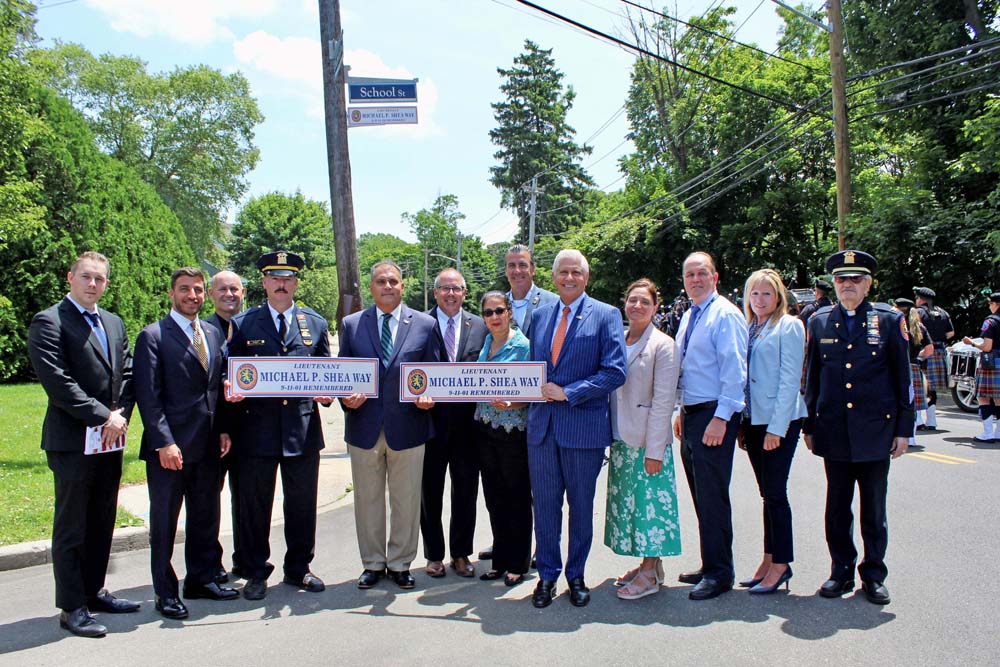 Oyster Bay Town Supervisor Joseph Saladino and his colleagues on the Town Board, joined by Nassau County Executive Bruce Blakeman and Nassau County Police Commissioner Patrick Ryder in a ceremonial street dedication to honor fallen Nassau County Police Department Lieutenant Michael P. Shea. Lieutenant Shea died in the line of duty as a result of cancer he developed after being exposed to toxins while working at Ground Zero after the 9/11 attacks on America. A “Lieutenant Michael P. Shea Way” street sign was unveiled at the corner of School Street and Berry Hill Road in Oyster Bay which is situated near the home where Lieutenant Shea resided with his wife Ingrid.

“Michael was assigned to securing Ground Zero as rescue workers searched for survivors in the days and weeks following the 9/11 attacks” Supervisor Saladino stated. “He gave his life as a result of his brave and selfless service to his undeterred commitment to duty.”

Lieutenant Shea served in the NYPD Highway Division for five years and then joined the Nassau Country Police Department in the 8th Precinct for 17 years, the 6th Precinct for nine years and concluded his career working in the 3rd Precinct. He served as a union trustee for the Nassau County Police Superior Officers Association representing 20 supervisors from the 6th Precinct. He was described by his colleagues as “soft-spoken, polite and gentle with a witty sense of humor” while always representing his members well. Lieutenant Shea was a fit and avid runner, and passed away on April 1, 2017. His wife, Ingrid, remains an active member of the Oyster Bay community.

“When people pass by this block, they will remember Lieutenant Shea as an exemplary first responder who did not hesitate to act, even if the situation was perilous, and as someone who always put the safety of residents, ahead of his own,” concluded Supervisor Saladino. “This street, in the community where he lived for many years, will forever serve as a reminder of his sacrifice and his extraordinary life.”