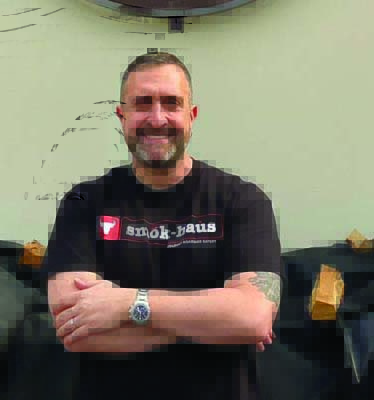 Garden City has become somewhat of a foodie’s destination over the last couple of years. Smok Haus, a casual restaurant and bar with authentic American BBQ, is one of the many great addition’s in the Village. The restaurant has garnered several awards over the years including ‘Best BBQ Restaurant’ and ‘Best Foods’ for 2022 in the chicken wings and ribs categories. The awards were part of the 2022 ‘Bethpage Best on Long Island awards.’

The restaurant is owned by Manny Voumvourakis, an MIT graduate and former Wall Street trader, who decided to pursue his passion of authentic American BBQ food.
“I had this concept in my mind of opening a restaurant with a fast casual, streamlined delivery and takeout menu with a dining in experience,” said the 52 year old Voumvourakis. “I wanted my customers to experience traditional American barbecue with an assortment of regional street foods.”
He said that he came up with the name Smok Haus, because it was one of the first URL’s available and that it was a simple name that incorporated what his business was all about.
“We have some unique menu items like our pork belly porchetta and our brined smoked brisket as well our pastrami sandwich, which is our showcase item,” said Voumvourakis.
He said that there weren’t too many places on Long Island known for their pastrami sandwiches, and was proud that it won best food category for 2022.
“I think what I’m most proud of though is that we can be included in some of the wonderful restaurants here in the Village, and that we’re helping to put Garden City on the map as a food destination.”
The restaurant, which opened in 2018, did not endure the extreme hardship’s that many restaurants faced during Covid-19 pandemic, and wasn’t forced to shutdown its business as a result.
“We were able to operate our fully streamlined takeout service and weren’t hit as hard as many of the the restaurant businesses were,” said Voumvourakis.
Smok Haus is located at 7 12th Street, Garden City. www.smok-haus.com

The Town of Oyster Bay has announced that veterans and...